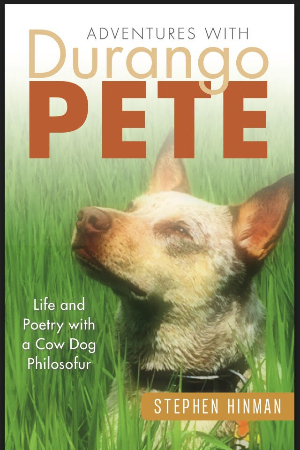 Stephen and his wife, Cynthia, went to a puppy adoption event near their Colorado home to look at a terrier. Instead, the tiny squeaks begging for attention came from an 8-week-old cattle dog crying, “Pick me up!” Stephen did. The puppy licked him up the nose, across his cheeks, and in his ears. The deal was sealed. Durango Pete had a new dad and Stephen was in for a wild ride.

Durango Pete and Stephen were soon locked into a battle of wills. The struggle for power and control is a quintessential human fight. It turned out to be the same for a man and his new dog. After months of frustration - desperation even - a simple game of tug-of-war was the turning point.

“Adventures with Durango Pete” is the story of how two stubborn souls found each other and discovered what a dog can teach an old man, and he a dog. Join them on the dusty trails and mountain peaks, and find the joy that blossoms from a true partnership of souls. 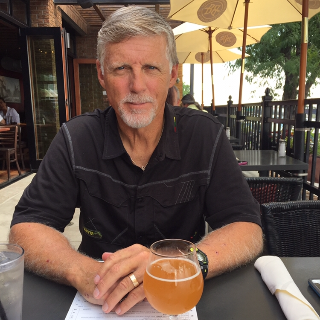 Award-winning author Stephen Hinman came into the world a hopeful wanderer, a ponderer of life, and a storyteller. After careers as an English teacher and coach, athletic club director, business owner, and physical therapist, Stephen made his way back to his early roots as a writer and poet.

Recently, he found a kindred spirit in his adopted cattle dog. Durango Pete, who has ancient wisdom, the gift of gab, and love of life, became Stephen’s constant companion.

Stephen has 3 children and 5 grandchildren. He, Durango Pete, and his wife, Cynthia, split time between homes in Denver and Grand Lake, Colorado, where they frequent prairie and mountain trails and Stephen continues to write.