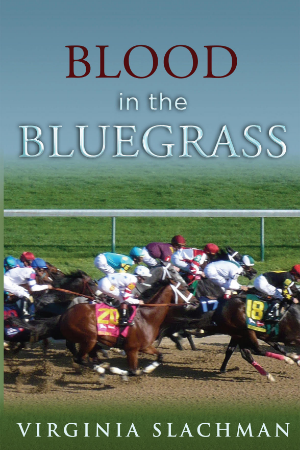 Blood in the Bluegrass

Action packed from the get-go and filled with unique characters, the book is hard to put down as it races headlong at full speed to the finish line. --Barry Irwin Founder/CEO Team Valor International

Harper had put the past behind her. Or so she thought. Fleeing the flashy, high dollar world of Kentucky horse racing for NYC, she’d been content living the life of a successful painter. But escape isn’t an option after the accidental death of her sister sends her back to the Bluegrass, a horse racing world filled with hope and heartbreak. As the body count rises at Eden Hill, Harper becomes convinced her sister’s death was no accident.

Probing more deeply, Harper realizes Paris’ death is tied to a dark and deadly secret, one she discovers is why her racehorses are dying. Solving her sister’s murder and saving her family’s stud farm will take every ounce of Harper’s wit and courage. When seven skeletons are discovered on the grounds, and the barn with her best Kentucky Derby prospects is set on fire, Harper bears down to find the killer. The problem is, the culprit could be anyone: Is it JD, her childhood sweetheart, Marshall, their long-time trainer, or is it their nasty neighbor Red Cole, in partnership with her family for generations? Someone is on a killing spree, and though Harper doesn’t know why she is sure of one thing—the murderer is someone she’s known and trusted her whole life. 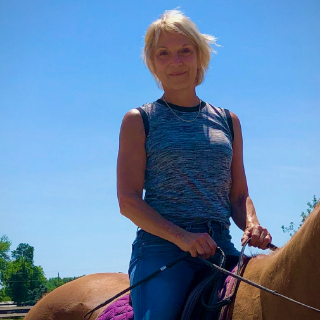 After completing research for her first novel set in the world of Kentucky Thoroughbred horse racing, Virginia Slachman became devoted to the care and welfare of racehorses. In addition to continuing her writing, publishing, and university teaching career, Slachman has worked for years with ex-racehorses in one way or another—caring for them, rehabilitating or retraining them for new careers, and writing about them.

Her work in rescue led to her adoption of Corredor dela Isla, her own ex-racehorse who continues to be her beloved companion. You can read about their journey at www.d-and-me.com, voted one of the Top[ 20 Equestrian blogs." She’s the author of six books, including Blood in the Bluegrass, her latest a novel set on a Lexington stud farm, released in November, 2019, which received high praise and 5-star Amazon ratings. For more information, see www.virginiaslachman.me.