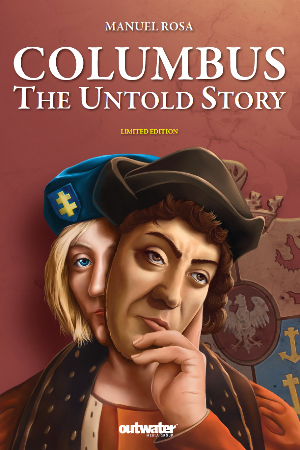 Rosa’s incipient Columbus, The Untold Story, presents the discoverer as a Pied Piper of Portugal, addresses the development of geographical knowledge, starting from Ptolemy, who calculated the size and shape of the earth with surprising accuracy. Columbus certainly understood this much and more: he was never lost at sea. This book exposes Columbus, the most expert navigator in Spain, as a secret agent working for the King of Portugal, an agent whose only “service” to Queen Isabel of Spain was to lead her on the mother of all wild goose chases. This operation did not take place in a vacuum. It resulted from centuries of hostility between Portugal and Spain.

Important religious overtones emerge again and again – connected with the famous voyages, with Atlantic exploration in general, with the ongoing series of Moslem conquests, and with Portugal’s crusading mission to crush Islam, to liberate Jerusalem, and to rebuild the Temple of Solomon, a mission that Columbus believed in passionately and alluded to in his journals, letters and notes. To plan and effectively implement a ruse on this scale was no mean feat. Columbus had an entourage of accomplices in Spain, many exposed for the first time in this book. The necessity of an ongoing, institutionalized cover-up by Portugal helped to foster the circumstances that would befuddle students of the past for a very long time.

Here at last myth separates from fact, revealing what actually transpired. Extremely fond of writing, the man that the world remembers as Columbus left a great deal of this overwhelming proof himself. Now, after more than five centuries, his own writings figure prominently in exposing what “Christopher Columbus” was really all about. 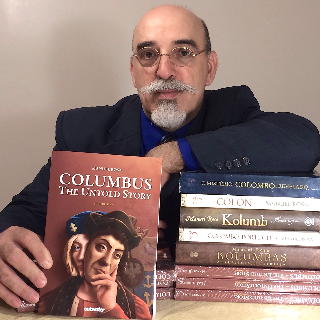 MANUEL ROSA is a Portuguese-American researcher and author who has spent more than a quarter century investigating America's legendary "discoverer," when aroused by controversy surrounding the Portuguese genealogy of Columbus’ wife. Rosa has poured all of his available time and resources into visiting European archives, libraries and museums and publicizing the fruits of his research (inter alia) on BBC, NPR, and many foreign-language outlets. Just before his book hit the shelves in Poland, it made front cover on the Polish Newsweek subsidiary.

Rosa’s facility in Portuguese, Spanish, Italian, French and English gave him access to an unusually broad range of primary sources, including original letters, maps and documents, some archived by the Spanish and Portuguese governments. Rosa was the first to present key information from the Portuguese archives that had been overlooked since it was recorded some 500 years ago. He participated with Prof. José Lorente, of the University of Granada, in the DNA studies of Columbus’ bones.

Mr. Rosa has advised UNESCO and the Hatian government on matters related to Columbus' lost ship, the Santa María . He has lectured on Columbus at American and European universities.