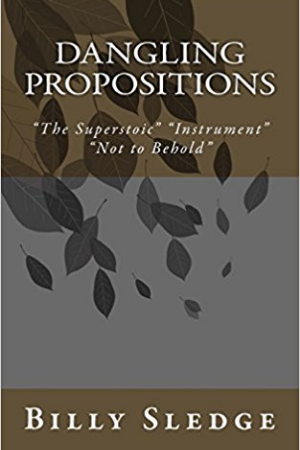 Dangling Propositions – "The Superstoic", "Instrument", "Not to Behold"

“…blessed are those/Whose blood and judgment are so well commingled/That they are not a pipe for Fortune’s finger/To sound what stop she please.” (Hamlet, Act III, Sc. 2) These Shakespearean lines may have been recalled by Nebo Rhombus, confronted with obeying the mysterious will of the “plasmamorph” in “Instrument,” one of three stories comprising Dangling Propositions. A force of life from Earth’s atmosphere has revealed itself to Rhombus, an image consultant/promoter. It is determined to employ him to somehow lead humankind from a world-threatening course, before that course is cataclysmically corrected.

A matter of course is also plotted in “The Superstoic,” though on an individual scale. Whether ultra-reticent library worker Zharko Solovich is willing, he is held to account for his right to be silent in an alternate world where no such right exists.

For compulsive mimic, Bogustin Guisermann, who hides himself mirroring others, being unintentionally “gifted” with the ability to blind people to his presence, as a result of though-projection experiments, may be the refuge from the “judging sight” of the world he’s always sought. In “Not to Behold,” to be perceived, or not to be perceived, seems the question. 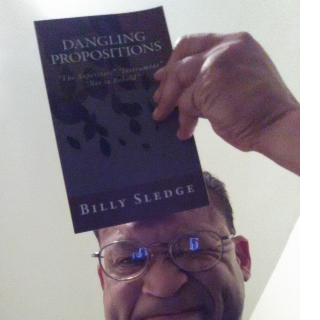 After attending several St. Louis city public schools, including Turner Middle School, he, his parents and his two sisters, moved to Hillsdale. They lived his four years at Normandy Senior High School in this St. Louis County municipality. The pursuit of a college education led to an Associate of Arts from Columbia College, and a Bachelor of Journalism from the University of Missouri at Columbia.

Mr. Sledge currently works in the receiving department for The Booksource, a bookseller specializing in educational books, helping teachers build libraries for their classrooms.