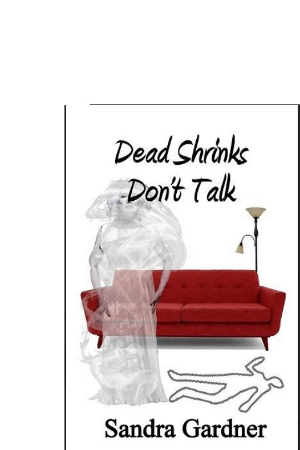 When Marabella Vinegar finds her psychotherapist's bloody corpse, she becomes the NYPD's perp of choice. Her recently deceased mother -- the bane of her existence in life -- comes back to help get her daughter out of trouble and find the real killer.

Things get even worse when, thanks to Marabella's and her mother's sleuthing, someone tries to kill her. Then another body is found and Marabella is thrown in jail, awaiting trial for two murders.

After the second attempt on Marabella's life, she's terrified that she'll be corpse number three ...

Gardner's coming-of-age novella, Halley and Me, won the Grassic Short Novel Award from Evening Street Press and was published in 2013. Her first mystery novel, Mother, Murder and Me, received a 2011 First New Author (Fiction) Contest award and was published by Swyers Publishing in 2012.

Gardner's mother-and-me mystery series is being published by Black Opal Books. The first book in the series, Dead Shrinks Don't Talk (a reprint of Mother, Murder and Me) was published May 5, 2018. Book 2 of the mother-and-me series, Grave Expectations, and Book 3, Death of a Nuisance, will follow.