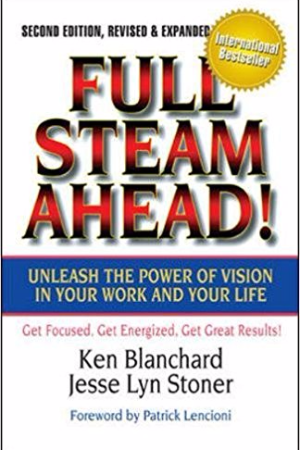 Full Steam Ahead! – Unleash the Power of Vision in Your Work and in Your Life

For team leaders, company leaders, entrepreneurs and individuals looking to refocus their lives.

Blanchard (The One Minute Manager) and Stoner have skillfully crafted an allegorical tale of Jim and Ellie, one a successful but uninspired business owner, and the other a recently-hired employee who is trying to reinvent her life. In their conversations, Jim confides to Ellie that running the insurance company his father created just isn't all that exciting anymore. Notes Jim: "When my father was president, everything here was full steam ahead." He goes on to say that his father really inspired the employees - they felt like they were doing important things at work, and there was real joy in the agency then. When Ellie asks whether "full steam ahead" means being reckless, or moving ahead blindly in the face of danger, Jim responds, "No, I think it's the opposite. It means having vision - being so clear about your purpose, so committed to it, and so sure about your ability to accomplish it, that you move ahead decisively despite any obstacles." This characterizes the tone and sentiment of the book - discovering the ability to unleash transformative power by developing a clear vision of where you want to take your organization and your personal life.

The first half of the book focuses on the three elements of a compelling vision, and the second half focuses on how to create it. The authors say, "What's important is not only what it says, but how it's created, how it's communicated and how it's lived. Examples abound here: The Costa Condia disaster of 2012. JFK's vision of putting a man on the moon by the end of the 1960s, Soviet athletes' technique of "mental rehearsal" in the 1976 Olympics.

This book gives a clear explanation of how to create a vision that will actually guide people on a day-by-day basis, not just some fluffy statement to be filed and forgotten. 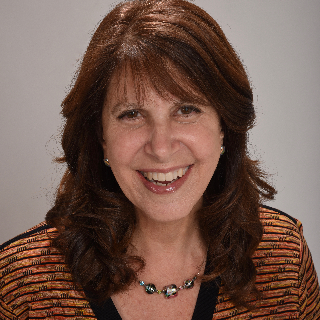 Jesse Lyn Stoner is founder of Seapoint Center for Collaborative Leadership, the former executive director of Guest House Retreat and Conference Center, founding executive director of The Berrett-Koehler Foundation, and sits on the board of directors for Berrett-Koehler Publishers. Dr. Stoner is author of several books, including international bestseller Full Steam Ahead: Unleash the Power of Vision, coauthored with Ken Blanchard (translated into 22 languages) and Leading at a Higher Level.

For over twenty-five years, she has worked closely with leaders in hundreds of organizations using collaborative processes to engage the entire workforce in creating their desired future. Her clients include Honda, Marriott, Skanska, Stanley Black & Decker, SAP and T.K. Maxx to name just a few.

Named American Management Association’s Leader to Watch, a Top 50 Leadership Expert by INC magazine, and recipient of the Conant Leadership Award, she has been featured in Harvard Business Review, Huffington Post and Forbes, and writes an award -winning weekly leadership blog. Active in social media, you can find her on Twitter @JesseLynStoner and Facebook at Seapoint Center.