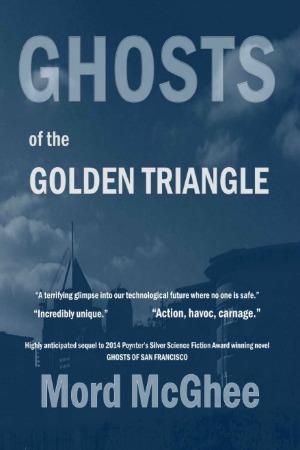 Ghosts of the Golden Triangle – Tales of Eclipse Vol.2

After Rigs infiltrated her former employer’s operations center, she found out she wasn’t alone… the hard way. Slicer heard the attack through the gang’s encrypted channel, but Rigs’ vitals had disappeared and there was nothing he could do to stop it. Next, the termination attempts on Eclipse came fast and furious. The gang had to hide or die alongside Rigs. Two years pass before one of them makes a lethal mistake. Now exposed to The Company’s vengeance, a murderous manhunt for the members of Eclipse begins. Things go from bad to much, much worse… quickly. What ensues is an unnerving, frightening look at our own bleak future. OUR WORLD— a dystopia where technological ghosts rule. Whether you’re new to Tales of Eclipse or a returning reader, grab your CaliCobra, plug in your P-Pin, and ride for ruin in the highly anticipated sequel to Ghosts of San Francisco. You won’t want to miss this exciting new novel from 2016 Silver Falchion Finalist & 2014 Dan Poynter’s Silver Medalist. 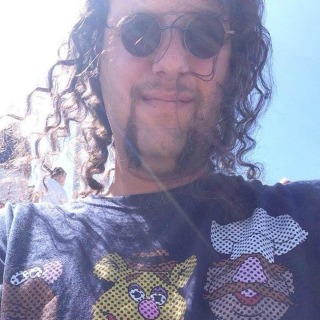 Mord McGhee is an award-winning (2016 Silver Falchion Finalist) and (2014 recipient of Dan Poynter's Silver Science Fiction Medal), American author of science fiction, fantasy, and horror. He's been active professionally since 2014. His body of work can be found in competitive markets around the world. McGhee has written for The Horror Within Magazine, can be found in professional anthologies and magazines, and is the screenwriter of the movie DEADLINE (Drake Productions-Cleveland, OH).

For all the latest see mordmcghee.com

What experts are saying: ADAM DAVIES "... a great addition to the genre." LOREN COLEMAN "... a uniquely intellectual American novel." GEORGE C. ROMERO "...Badass page turner, if you hate to read, this book will change your mind." STEVE ALTEN "Intense. Graphic. Provocative. The psychological thriller has a new voice and it is Mord McGhee."

"IT'S NOT DYSTOPIA TO THINK HISTORY WILL REPEAT ITSELF." ~Mord McGhee 2014