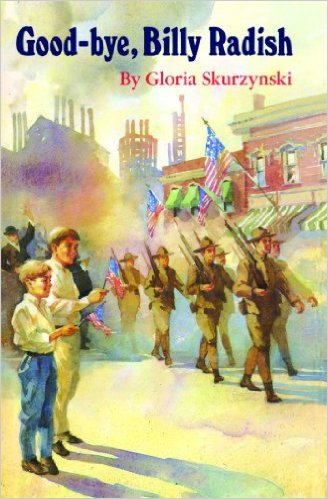 A steep wooden stairway descends from one Pittsburgh street to another, and, at its foot, two boys meet for the first time, bridging a gap of language and culture to extend the hand of friendship. With all the innocent arrogance of the second-generation American, Hank Kerner dubs Ukrainian Bazyli Radichevich`Billy Radish, and Billy Radish he remains, to all but his family, until the end. Older and bigger than Hank, the boy has already graduated to long pants, will soon show an interest in girls, and looks forward to his 14th birthday when he can leave school and take a man's job (7 days a week, 12 hours a day) in the mill. Steel mill accidents and the war take their toll on the boys' world, but it's the Spanish influenza that strikes tragically and without warning. In this story permeated with the realities of life in World War I Pittsburgh, characters, time, and place spring vividly to life from the very first pages

Gloria Skurzynski has said, "When I work on a book like GOOD-BYE, BILLY RADISH, I find my way back home to the smoky, sooty, western Pennsylvania town where flames from smokestacks set fire to the night. Today the smoke is gone, and so are the steel mills, but in my own memory, and through the stories my parents told me, I can recreate that time and place. It's important that I do that, because if I don't, no one will remember the rumbles and shrieks of the mills, the smell of the smoke, the blaze of the furnaces, and the enormous power of the steel mills over the townspeople." Gloria is the author of more than sixty books for children and young adults. Her books have won numerous awards, among them the Christopher Award, the Spur Award from the Western Writers of America, the Golden Kite Award, and the Science Book Award from the American Institute of Physics. She lives with her husband, Ed, in Boise, Idaho.