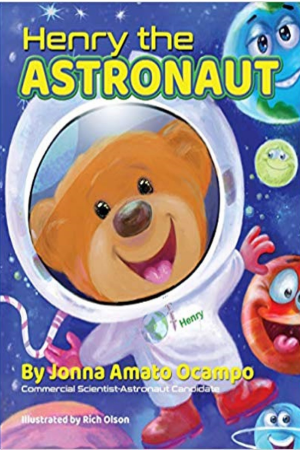 Delightfully captivating the imagination and a world of wonder is this bedtime story about Henry, a teddy bear, and an astronaut. When Henry lays down to sleep, the brightness of the night sky greets him. Henry wonders what is hiding behind the twinkling stars and the light of the moon that shines into his bedroom each night.

The stellar adventure begins with Henry's rocket ship flying into the night's sky toward the edge of space and then landing on the Moon. From Earth's satellite, Henry takes a magical ride on a Solar System Slide where he meets and greets each planet. The planets welcome Henry, and their conversations lead to details and knowledge about each world.

A stellar and high-spirited story for reaching for the stars, the moon, and beyond. A little boy who believes in his dreams. A dream where he becomes Henry the Astronaut. 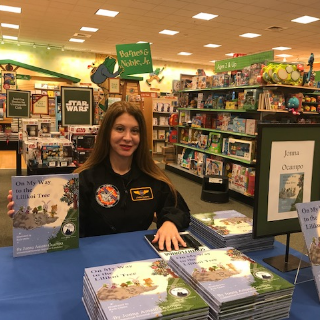 Jonna Amato-Ocampo is an inventor, a scientist, and a commercial scientist-astronaut candidate who believes that dreams do not have deadlines. Her first children’s book, On My Way to the Lilikoi Tree, has won the Moonbeam Children’s Book Awards, Silver Medal Winner for Children's Picture E-book, reached #1 New Release on Amazon for Children’s Mystery and Wonder Books and received the distinction of Five Stars from Readers Favorite.

"Writing to inspire, photographing to create a vision, and sharing to give hope. "

With a passion for exploration, in 2018, Jonna was credited for the discovery of five paleontology finds dating back to 5 million years ago, designed and operated a scientific mission on the Lemur-2-Greenberg Satellite orbiting the Earth, and was awarded a NASA Florida Space Grant Consortium Fellowship. She presented her scientific research to the United Nations in Vienna, Austria and in October 2018, released her second children's book, Henry the Astronaut. 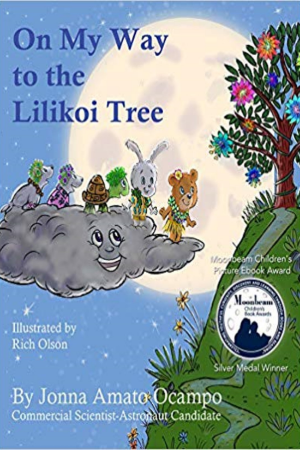 On My Way to the Lilikoi Tree