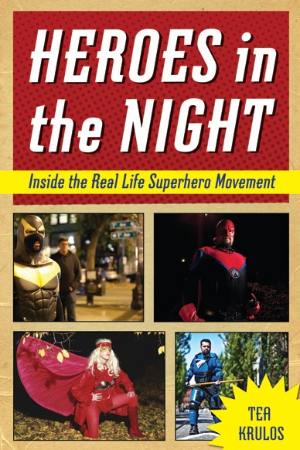 Heroes in the Night – Inside the Real Life Superhero Movement

The Watchman didn’t arrive in a Batmobile but drove a tan, four-door Pontiac. He was in costume, of course—a trench coat, motorcycle gloves, army boots, a domino mask, and a red hooded sweatshirt emblazoned with a W logo. Journalist Tea Krulos had spoken to him over the phone but never face-to-mask. By the end of the interview, he wasn’t sure if the Watchman was delightfully eccentric or completely crazy. But he was going to find out.Heroes in the Night traces Krulos’s journey into the strange subculture of Real Life Superheroes, random citizens who have adopted comic book–style personas and hit the streets to fight injustice. Some concentrate on humanitarian or activist missions—helping the homeless, gathering donations for food banks, or delivering toys to children—while others actively patrol their neighborhoods looking for crime to fight. By day, these modern Clark Kents work as dishwashers, pencil pushers, and executives in Fortune 500 companies. But by night, only the Shadow knows.Well, the Shadow and Tea Krulos. Through historical research, extensive interviews, and many long hours walking patrol in Brooklyn, Seattle, San Diego, Minneapolis, and Vancouver, British Columbia, Krulos discovered what being a RLSH is all about. He shares not only their shining, triumphant moments but some of their ill-advised, terrifying disasters as well. It’s all part of the life of a superhero. As the Watchman explains, “If everyone made little changes in what they did, gave a little more to charity, watched out for their neighbors, we wouldn’t have the problems that we have.” 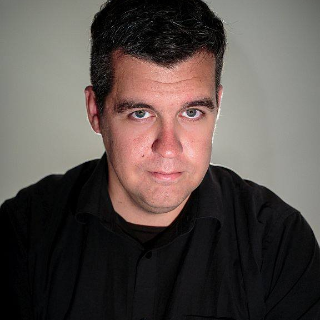 Tea Krulos is a freelance writer and author from Milwaukee, WI. He is a regular contributor to publications such as the Riverwest Currents, Milwaukee Record, M magazine, Fortean Times, Alcoholmanac, and the Shepherd Express.

He has also been published in a wide variety of other publications including the New York Press, The Guardian, Boston Phoenix, Scandinavian Traveler, Maximumrocknroll, The Onion’s “A.V. Club” section, and Pop Mythology.

Some of his favorite subjects to explore and write about include unique and unusual subcultures, people, and places, as well as art and music.

Krulos’s first book is a non-fiction titled Heroes in the Night: Inside the Real Life Superhero Movement. It was published in October 2013 by Chicago Review Press. Heroes in the Night is a thorough investigation of a movement or subculture of people who call themselves “Real Life Super Heroes” and adopt their own costumed personas and hit the street to fight injustice.

His second book, Monster Hunters: On the Trail With Ghost Hunters, Bigfooters, Ufologists, and Other Paranormal Investigators, was published June 2015, also from Chicago Review Press. It was a finalist in the Midwest Book Awards and made several reading lists.

Krulos is currently working on his third and fourth books.