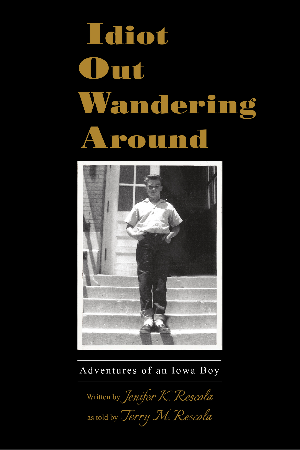 Idiot Out Wandering Around – Adventures of an Iowa Boy

Escaping death a dozen times? Actually dying, and being placed in a body bag that was zipped up all the way to his chin until he was miraculously brought back to life when Officer Gonzalez stepped in? Living on a faraway island that measured only 1-1/2 miles wide by 2 miles long and surrounded by nothing but vast ocean for over 1,400 miles in every direction? Accidentally going AWOL in the Army followed by an anxious challenge to get back to Korea where he served his duty and ended his stay with an honorable discharge? A nail-biting deep-sea adventure? Yes, these and many other compelling escapades fill the pages of my current book.

Hello! My name is Jenifer Rescola and I’ve recently written a biography in which a heartbreaking tragedy for Terry at the young age of eleven abruptly sets a life altering course in his path. It’s called "Idiot Out Wandering Around" because he and many other Iowans use the endearing expression to self-describe their trials and triumphs as they go through life.

Terry began his life as any other normal child has; going to school, playing baseball with friends, riding his bicycle...until one day he lost his beloved father, a man who was a respected U.S. Navy Lieutenant and Pearl Harbor survivor very involved in the attack. Soon after his father died, Terry lost his heart-broken mother to a severe alcohol addiction in an era where there was no help for her, and from then on Terry basically raised himself while lacking the guidance that every child needs, as well as the understanding of many of life’s risks.

Terry’s story is about innocence survival, and this book and its many stories speak to the way Terry made choices in life, which were naïve, trusting, and inexperienced. Before his father’s death, his father taught Terry to play the drums and you can hear and feel this beating all the way along.

When he lived in Iowa, in youth sports, his anger at his circumstances in life pushed him to excel and become an undefeated miler, undefeated wrestler, and a hot dog in Little League while hitting many cycles. A cycle is hitting a single, a double, a triple, and a home run all in one game.

Crossing pivotal decades beginning in the 1950s, this book with its astonishing stories takes you to Iowa, California’s Central Coast, and Arizona. Many people, including those as diverse as drummers and military personnel, bikers and fishermen, nude beach-goers, nurses and sports fans, can relate to "Idiot Out Wandering Around." 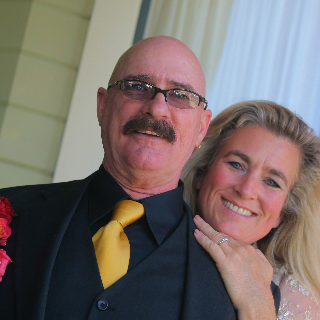 Jenifer Rescola, a native Californian, was born in Hollywood and spent most of her years living on the central coast. Until now, she worked primarily in bookkeeping, property management, and later became a psychiatric technician at a state mental hospital. A nature lover at heart, she often finds herself hiking in the nearby wildernesses. As a young adult, she put her writing dreams on hold, since she was a single mom raising her two children. Jenifer aspires to someday play piano and learn American Sign Language.

Jenifer met Terry and they were married, over time she found that his adventurous life stories inspired her to want to write about them. This material planted the long-awaited seed for Jenifer to begin her lifelong passion for writing.