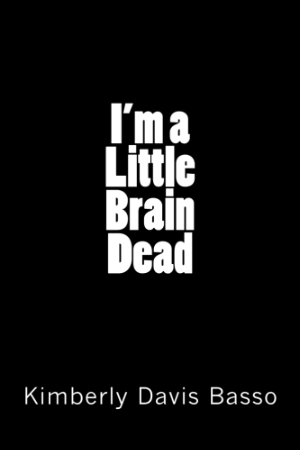 Award-Winning Finalist for Humor in the 2018 International Book Awards, "I'm a Little Brain Dead" is considered laugh out loud funny by critics and readers.

Four years ago Kimberly Davis Basso had a stroke. Home alone with her second grader and her baby, she was in serious trouble. Her book on the experience is not. Faced with a medical crisis, she found the humor in everything. From surviving a stroke to surviving a zombie apocalypse, "I'm a Little Brain Dead" is alarmingly irreverent. Even Kimberly's hero, her eight-year-old daughter, adds to the mayhem in the weeks following her stroke. No matter how critical or ridiculous the situation, Kimberly abides by their family rule "Panicking never helps." You'll get an inside look at being a middle-aged stroke patient as she hosts a neurological event, juggles doctors, undergoes a heart procedure and asks the really big question - how tiny is tiny when it refers to dead tissue?

What would you do? Are you prepared to have a medical crisis, unable to speak or walk? Would your kids know what to do? It's time to make an escape plan. Kimberly will walk (or rather shuffle) readers through her experience in an honest, hilarious look at the site of the world's smallest zombie apocalypse - her brain.

"When reading an author’s recollection of the sudden, awful realization she is having a stroke, and of the ensuing fear and uncertainty associated with how one’s life may forever change, roll-on-the-floor hilarity isn’t the first reaction that comes to mind. However, Kimberly Davis Basso manages to produce such a gem with I’m a Little Brain Dead. It should be said, in all seriousness, that suffering a stroke is no laughing matter. A shame no one informed Ms. Basso." - Neil White, Readers Favorite Review, 5 Stars 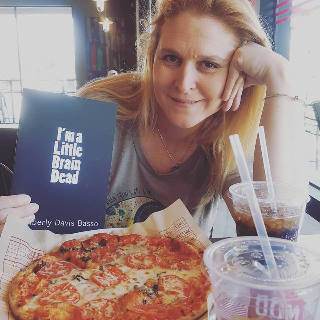 Kimberly Davis Basso is a native of Massachusetts. Her first book, the irreverently titled "I'm a Little Brain Dead"chronicles her medical adventures after a stroke. She is currently writing the prequel as well as an adventure series for young adults. ​ Kimberly spent nearly twenty five years as a stage director, playwright and producer. As a resident artist, high school theater director and artistic director, she developed theater education and play writing programs, working with artists of all ages. A number of her scripts are available for production. ​​ Kimberly currently lives in the Los Angeles area with her husband and two children. She absolutely loves hearing from readers, and attends events all over (invite her - she'll say yes). You can reach her through her website, www.KimberlyDavisBasso.com or follow her on twitter and instagram @KDBWrites. Thank you to hometownreads.com for this excellent website!