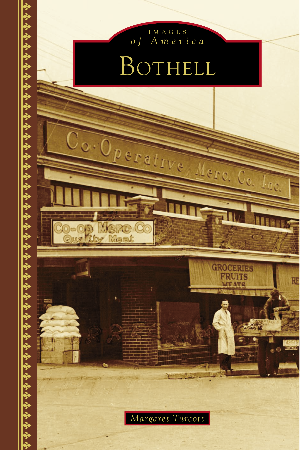 Bothell is a community located north east of Seattle along the shores of the Sammamish River, known as the Squak Slough in the 1800s. White settlers made their way up the river by boat and settled among the less than 200 Native Americans who lived along the river and in the forests surrounding the area. For the first seventeen years the only way to access Bothell was by river travel. When the railroad came to the area in 1887, the railroad added another means of travel. Finally, in 1913, a road was built that linked Bothell to Seattle.

This book tells the story of the settling of Bothell and the creation of a community that included churches, schools, bands, sports teams, and fraternal organizations. You will meet the founding families of the community and learn of the hardships they faced as they cleared and civilized the land along the river. As Bothell grew, the inevitable tensions among town leaders led to political fights and mudslinging in a contentious fight for incorporation in 1909. Bothell's long-standing Fourth of July celebration had an interesting twist in 1910 when the parade and events were influenced by a heavy-weight boxing fight held in Reno, Nevada on July 4th that year.

The Bothell book is a collection of 200 photographs. Most of the photographs are from the 1800s and early 1900s. Each photograph tells a story about the town arranged in chapters as follows: Early Settlements, A New Community, Growing Pains, Fourth of July, and Iconic Bothell.