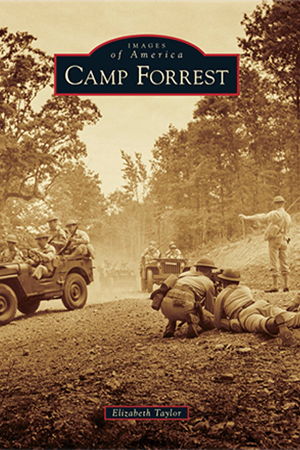 Camp Forrest was a training, induction, and combatant prisoner-of-war (POW) facility located on the outskirts of Tullahoma, Tennessee. It was a self-sustaining city where over 70,000 soldiers were stationed and approximately 12,000 civilians were employed throughout World War II.

After the war ended, the base was decommissioned and dismantled in 1946. In 1951, the area was recommissioned and expanded into the US Air Force's Arnold Engineering Development Complex. Few remains of this important World War II facility exist today; however, the images within provide a glimpse into the effects and realities of a global war on American soil.

Elizabeth Taylor has a doctorate in public administration and has researched the many impacts of Camp Forrest both abroad and on the home front. She currently maintains the Camp Forest website (www.CampForrest.com) and welcomes individuals to contact her with stories, comments, and photographs. The images included in this title were obtained from the National Archives and Records Administration and private collections.