"Lost, Almost takes us into a magnetic world, one where characters orbit not just Los Alamos and the sciences, but also the appealingly hard-nosed physicist Adam Brooks. His son, his grandchildren, and his colleagues all live within his gravitational pull. These characters' passion for their work becomes the reader's, and Amy P. Knight paints her brilliant subjects with confidence, empathy, and a deep understanding of psychology. Knight has managed to build a small solar system in these pages, one I was bereft to leave. Hers is a bold, enthralling, and often hilarious new voice." —Rebecca Makkai, author of Music for Wartime

The life and nuclear-weapons work of renowned physicist Adam Brooks form the center of an orbit that binds his family and colleagues to him as he struggles to find his place in science, history, and love. In this debut novel, searingly brilliant characters fill a world at once fascinating and familiar in its humanity, empathy, and humor. 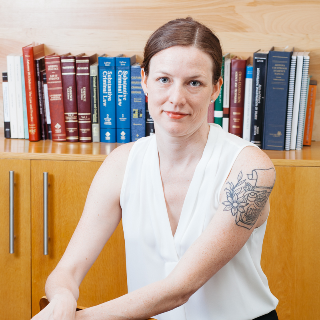 AMY KNIGHT grew up outside of Philadelphia. She studied English and cognitive science at Vassar College before earning her MFA from the University of Arizona and her law degree from Stanford. Currently, she lives in Tucson, Arizona with her dogs, Oscar and Ruby, and practices criminal law.