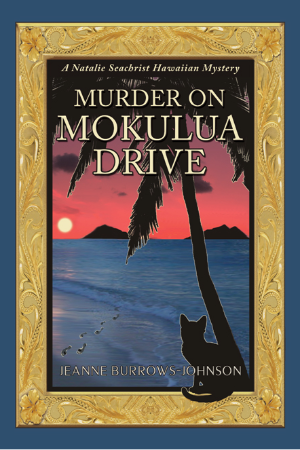 Murder on Mokulua Drive, is the second Natalie Seachrist Hawaiian cozy mystery written by Jeanne Burrows-Johnson. Like Prospect for Murder (the award winning first book), Murder on Mokulua Drive features the lush environs of the Hawaiian Islands, snippets of pan-Pacific history, a cast of characters, chapter aphorisms, floral art pagination folios, a guide to pronouncing Hawaiian vocabulary, and a glossary of non-English and specialized terms.

Hawai`i journalist Natalie Seachrist has unusual visions. Her viewing of war-like scenes of a family’s predawn escape from Denmark initially initially seems unremarkable. Soon Natalie and boyfriend private investigator Keoni Hewitt move into a Lanikai cottage, where their expectations for relaxed living are met with warm welcomes. Across the fence lives Miriam Didión, a widowed human rights activist, Joanne Walther, a retired teacher, and Esmeralda Cruz, a cook. They have all become friends by the time Natalie throws Keoni a surprise birthday party. Even Natalie’s feline companion Miss Una has embraced the women and keeps nightly watch over their property. Unfortunately, another vision of a garroting by moonlit shatters the peaceful environment and Natalie must reveal her horrifying insights to Keoni’s former partner, Honolulu Police Detective John Dias.

When a suspect’s body is found on Diamond Head Beach, the case appears solved and Natalie plans a tour of historic Kawai Nui Marsh, a favorite destination of Queen Lili`uokalani. Unfortunately, the day of playing tourist devolves, and Natalie and her friends are soon in the crosshairs of a dangerous adversary. Does resolution of the gruesome murder lie in the deceased’s transnational past? Or in the visible present among seemingly innocuous companions? 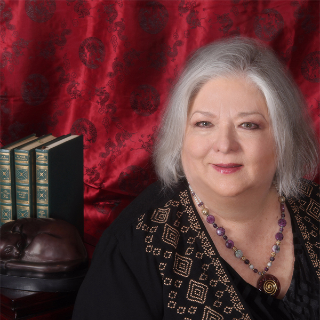 My writing embraces my life experiences in the performing arts, education, and marketing. My inspiration for storytelling is rooted in theatrical training during my youth and grew with the colorful tales shared by myriad characters in my life. I moved to Hawaii in 1973, where I taught performing arts classes and helped run Highland Games. Academically, I hold a Bachelor of Arts degree in history from the University of Hawaii and membership in Phi Beta Kappa and Phi Alpha Theta I am also a member of the National Writers Union, Sisters in Crime, Arizona Mystery Writers; and the British Association of Teachers of Dancing, Highland Division. While completing coursework toward a Master of Arts degree (concentration, the Allied Occupation of Japan, 1945-1954), I worked as a teaching assistant in the World Civilization program of the history department of the University of Hawaii. For many years I have provided marketing advice to entrepreneurs, executives, authors, and artists.

Some of my authored and co-authored work has appeared in: Broker World; Newport This Week, the Hawaii Medical Journal, and, The Rotarian. I also co-authored and served as art director and indexer of UNDER SONORAL SKIES, PROSE AND POETRY FROM THE HIGH DESERT [print, e-book and e-audio editions]. Having been a resident of Hawaii for 20 years, it’s not surprising that the Natalie Seachrist mysteries are set in its lush and multicultural environment. While sampling Island life and pan-Pacific history, my readers join in the heroine’s contemplation of haunting visions and puzzling deaths. The award-winning PROSPECT FOR MURDER and MURDER ON MOKULUA DRIVE have been joined by MURDERS OF CONVEYANCE. This third book in the series takes place during a Chinese New Year scavenger hunt across Oahu as Natalie, Keoni, and Miss Una explore two murders separated by sixty years.

You’ll find Island recipes, a comprehensive glossary of terms included in the mysteries and more information about Jeanne’s projects at my author website. There you can also learn about CONVERSATIONS WITH AUNTIE CAROL, A SERIES OF HAWAIIAN ORAL HISTORY INTERVIEWS. Caroline Kuliaikanuukapu Wilcox DeLima Farias was the grandniece of Hawaiian revolutionary Robert W. K. Wilcox, the cousin of Johanna Wilcox [the first woman registered to vote in Hawaii] and a performer of hula awana who was dancing at the Moana Hotel in Waikīkī on December 6, 1941. There’s also a link to my blog that helps authors and other creative professionals examine issues in shaping, refining, and marketing their work. Please use the contact forms on my websites to drop me a note . . . 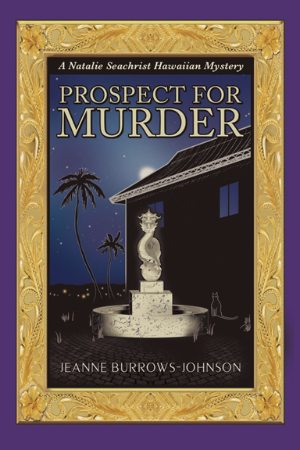 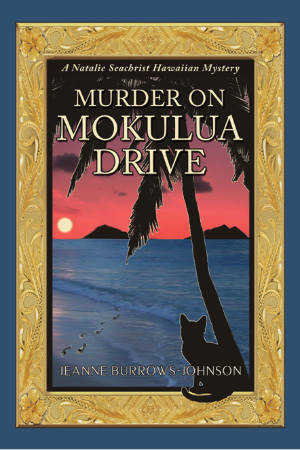 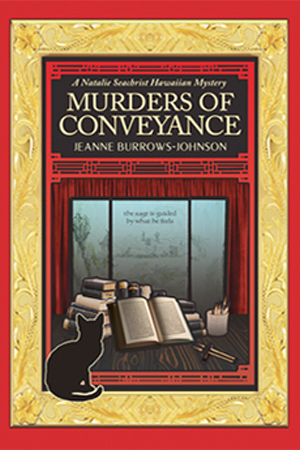