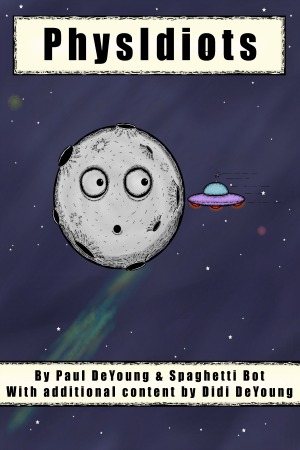 Just a few parallel universes away, Tom and Boyd are a couple of bumbling amateur scientists exploring space and time with their talking dog named Martin Luther. Together the trio faces the trials and tribulations of everything from making rent to escaping blood thirsty alien mobsters.

Three stories about two idiots and their dog.

Tom vs. The Boyds - One Boyd is a pain in the ass to deal with. Seven is an unfair task even for Sisyphus. After Boyd undergoes a grotesque transformation that turns him into something of a living pus boil, he pops into seven little versions of himself for reasons unknown, Tom does his best to manage things while trying to find a cure. In the meantime the little Boyds have established a successful a/c cleaning business. Across a few dimensions and just a bit to the left, an army prepares to invade earth and wage war with the trio.

Thranky Business - On a planetoid far away, Tom is mistaken for a thief by an infamous crime boss who is a little hung up on the whole eye for an eye thing. Though totally ignorant of the crime Tom is not, despite himself, totally innocent of it. After getting into a bottle of some enamor enhancing whiskey Boyd engages in some less than savory acts with one of the locals.

Here and Where Again? - Recovering from the night before can be hard and it’s not any easier when you wake up in some strange forest next to a crashed UFO. A somewhat annual hunting expedition for the trio goes completely south. This year’s game is the Chupacabra and the trio’s space traveling car is on the line as they compete against an angry 3ft tall hunter for top kill.