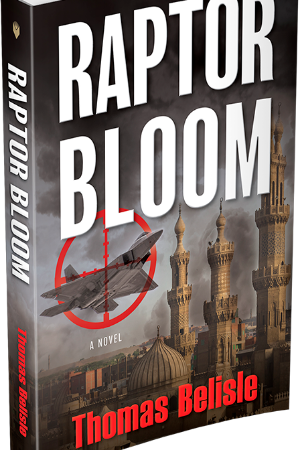 My novel, Raptor Bloom, is a fictional thriller that pits deep seated Iranian treachery, intent on corrupting the most coveted technology on earth, against America’s heroic efforts to prevent its global power from being neutralized. A Syrian terrorist with a score to settle breaches the tightest security on the planet to gain control of the world’s premier stealth aircraft, knowing that the F-22 Raptor is the key to stop a pre-emptive American attack on Iran’s nuclear tipped missiles and prevent the spread of a radical Ayatollah’s holy caliphate.       Collateral damage from an American attack on Syrian terrorists eliminated most of Khalil Ruffa’s family, while the same attack resulted in the death of Matt Black’s father. Fate and circumstance intertwines their lives with disastrous consequences. As Iran races to complete their nuclear ballistic missile warhead installation and unite the Persian Gulf nations, Khalil, a brilliant Syrian engineer, is recruited by the rogue regime and becomes the key to penetrating and defeating stealth, America’s singular battlefield advantage. Leveraging technology that China’s sleeper agents have stolen from the United States, Iran pursues the unthinkable—hacking into the Raptor’s electronics to make it vulnerable to attack. Provoked by Iranian assaults on U.S. forces and their allies, Captain Matt Black, now a seasoned fighter pilot leads his fellow aviators on dangerous missions to stop Khalil and the Ayatollah, and reset the strategic balance. He is unaware of the deadly Epsilon modification the Syrian buried deep within the Raptor’s critical components. As a result, the hunter becomes the hunted.

Readers of Raptor Bloom will find themselves immersed in the protagonist’s traitorous actions, second-guessing Iran’s subterfuge, and believing they are sucking pure oxygen while flying combat missions in the cockpit of an advanced fighter jet. The story has extraordinary relevance to current events in the Persian Gulf.

Thomas Belisle cultivated his writing ability over many years, leveraging his educational, military and aircraft industry experience to create stories with suspenseful plots, interesting characters, and intriguing settings. His action-thriller novels reflect the excitement and detail of the myriad worldwide locations where he visited or lived. His first novel, Raptor Bloom, is a fast paced adventure with plenty of suspense, treachery, and edge-of-the-seat aerial combat action. When he’s not engaged in producing the next thriller at his home in Florida with his wife Cathy, he takes advantage of the opportunity for plenty of golf, biking and traveling the world.