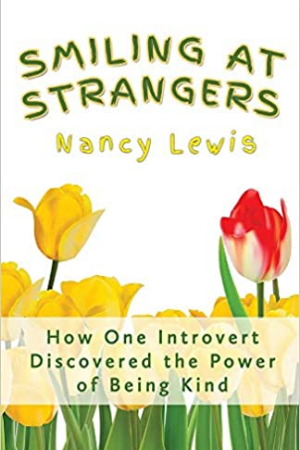 “In these tumultuous, chaotic, and divisive times in which we find ourselves comes a breath of fresh air. Nancy’s book is this breath: a powerful yet simple manifesto for all of us. Read this book!! Practicing kindness will change your world.” — Dr. Gloria Harrison, Clinical Psychologist

It all started with a smile. A trip to the local farmers market created an opportunity for the author to offer a simple kindness to a stressed young mother shopping with four small children. She made eye contact and smiled, and the mother responded with a soft “Thank you.” This single act is one of the greatest gifts we can give one another. The message it sends is, I see you and acknowledge our kinship as members of the human species doing the best we can. I wish you well.

Everyone deserves to be seen and acknowledged. In a world that many experience as cold and lonely, receiving a simple smile can bring the warmth of connection, however brief.

Smiling at Strangers, written by a shy and introverted author, is a handbook for building a community of kindred souls who share her mission to create a kinder world one smile at a time. Although it has much to offer to anyone wanting to share kindness with others, its target audience is kindhearted socially shy introverts who tend to restrict interactions with strangers in public places. It will empower even the most introverted among us to interact in the world in a different way through actions as simple as a smile of acknowledgment. 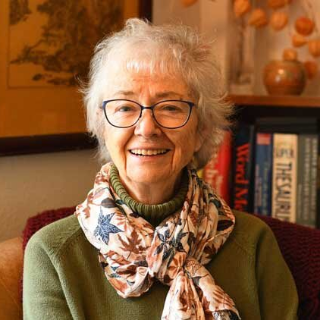 It all started with a high school award. It came as a surprise to Nancy Crouch—now author Nancy Lewis—when, as a senior in high school in New London, Connecticut, she received the Excellence in English award during her school’s senior awards event. A shy introvert, Nancy still remembers the shock of having her name called to receive the award. But what she remembers most is what she said to her mother the next morning, when her mom congratulated her on winning the award. “Someday,” Nancy said, “I’m going to write a book. But first I need to get some life experience.”

Sixty-two years later, Nancy decided she’d gotten enough life experience to write that book. Along the way she earned a degree in English from one of Connecticut’s four teacher colleges, then discovered after two years of teaching that she’d picked the wrong profession. She made a wiser choice in choosing a life partner, and six decades later is still married to her husband Richard, with whom she has two sons and five grandchildren.

Further education, this time in library science, led Nancy to a job setting up a medical library for a rehabilitation hospital in Milwaukee, Wisconsin, and another for the State Energy Office in Little Rock, Arkansas, while Bill Clinton was governor. She also picked up a master’s degree in adult education, which she never used. In 1996, she was offered an opportunity to edit a book. She went on to spend the next 25 years doing freelance book editing, having found an occupation ideally suited for an introvert.

Until she was in her late seventies, Nancy habitually avoided initiating interactions with strangers. Then a series of small, seemingly minor, events awakened her to the need to come out of her shell, face her fear, and acknowledge that she yet had something to offer in an increasingly disconnected world, even if it was only a smile. Something was needed. Something she could provide. Simple kindness.

In 2017, during her 80th year on the planet, Nancy began writing the book she foresaw when she was 18. Smiling at Strangers: How One Introvert Discovered the Power of Being Kind is that book. She is using it to inspire others to discover for themselves the power of offering kindness to strangers in service to a more connected, “we”-focused world.