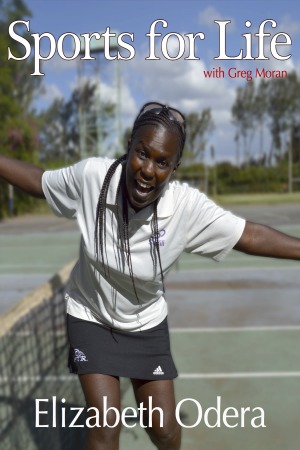 For over 20 years Dr. Elizabeth Odera has been using sports and education to save lives. Racquet in hand, she travels the dirt roads of Kibera, one of the world’s biggest and most dangerous slums, seeking to help those humanity seems to have forgotten. A true hero in every sense of the word, Sports for Life details her amazing journey passes along the philosophy that continues to change and save the lives of countless children. 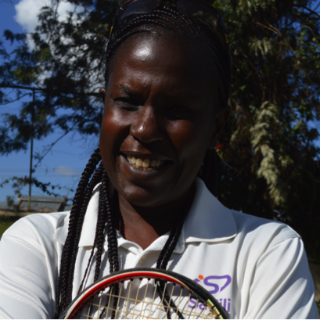 Dr. Elizabeth Odera, Founder of Sadili Oval Sports Academy and Malezi Foundation, who was recently highlighted as one of the highest women achievers in recent Kenyan history, was knighted with the Bronze Medal of Honor of French Order of Youth and Sports by the Government of France in 2008 for her ground breaking work in development of youth sports, and her commitment to excellence in education. In addition, she has been awarded, in 2007 with the Head of State Commendation (HSC) from the Government of Kenya. “Princy”, as the kids call her (or “Dr. Liz” as she is known by everyone else), has been involved in the education and training of more than 11,000 youth in various sports, including basketball, tennis, football, rugby, athletics and swimming. Liz was one of Kenya’s top players between 1976 and 1986, when she even played tennis circuits briefly in Europe before choosing to take up academics more seriously, eventually majoring in molecular biology and sports science. She has de-mystified tennis and opened opportunities to about 3,000 children from poor and rich communities alike, making Sadili the melting pot for tennis in the region. She initiated Tennis Africa Cup which is now the single largest network of junior players. Odera has an extensive youth program in Kibera that includes a soccer training and league (108 teams and 2,700 children), netball league, a weekly basketball training, a Girl Power Clubs Africa (which Serena Williams has visited twice), a teenage girls’ leadership program with over 700 members, and a tennis after-school education project in partnership with the Professional Tennis Registry (PTR) and has earned an honorary USTA-NJTL membership. Liz has successfully developed a large number of juniors in tennis, who have represented their respective national teams, played ITF events (including Wimbledon and US Open), and earned important scholarships to colleges and high schools in Europe and USA. She has played a pivotal role in the development of the Kenyan national rugby teams, designing appropriate training programs, placing Sadili in the special position as the official Performance Partner. She successfully piloted the Nature and Sports Camps together with UNEP and GSA, children's sport and environmental leadership initiative that is expected to roll out to other underprivileged communities in the world. Liz holds degrees in sports sciences, immunology, parasitology and education in Kenya and Denmark. Dr. Odera and her team received the reward of the Spirit of the Land of the Olympic Games of the Salt Lake City in 2002 for her Sports For Life Program”, the G-ForSE in Japan in 2003 and the Humanitarian of the Year in 2004 in South Carolina (PTR). A International Tester and Clinician, Liz is currently the PTR International Committee, representing Africa and Provider for Kenya. Liz was celebrated as a ChangeMakeHer, one of the world’s most influential and inspiring women of 2011 (Ashoka ChangeMaker). For more information on Liz, please go to: http://www.linkedin.com/profile/view?id=57549450&trk=navresponsivetab_profile