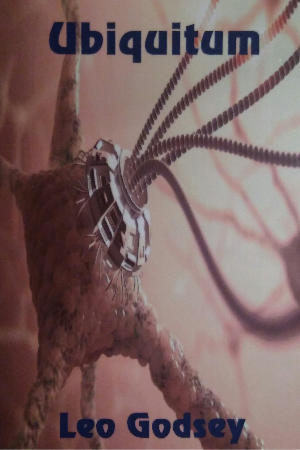 There exists a complex on the dark side of the moon known as the Anti-Holocompactor, which houses immortal humans from a lost world. Zolan, a neurotic, albeit successful man in his mid-twenties from the country of Cyclopea, comes to intimately know a one-hundred-year-old defector, Hemp, from the INFINiTECH corporation, as well as Rovanna, a medically dead young woman. She mysteriously crash-landed upon Hemp’s territory in an astonishingly advanced extraterrestrial craft. Hemp is determined to transplant a perfectly replicated version of Rovanna’s brain back into her and cure her fatally broken body. In the world of Daemios, a colossal organic being called The Draimoniad—which, among other things, functions as an Anti-Holocompactor—is used to transfer human consciousness from other worlds. Its ruler and chief engineer, Dzielmun, is a biotechnology-sustained seven thousand-year-old being. Daemios teems with cybernetically modified humanoids and bizarre megalithic structures, which collectively augment the technological means by which he preserves himself. The Earthlings, Dzielmun, along with his twisted protege from the world of Eoros, Lehvan, and the Anti-Holocompactor dwellers comprise but one layer of a multi-world, multi-dimensional web of events that interconnect the Book of Genesis account, the fundamental nature and future of humanity, as well as the fates of other worlds that have been involved with Earthly civilization all along... to name but a few elements of climactic significance.

My first novel, "Ubiquitum", was released in January of 2017, written under the pen name Leo Godsey. It is a work of Sci-Fi and dark comedy, in which I incorporated elements of comparative mythology, theology, future technology, and speculative prehistory. I would say it is certainly an experimental, unique work that readers won't find everyday. Recently I finished the manuscript for my second novel, "Tetrad of the Fallen", which is a longer, more technical work of serious Sci-Fi infused with characters representative of mythological personages which could be applied to counterparts spanning the polytheistic legends of Greek, Sumerian, and Egyptian accounts. In addition, I have completed two short stories, namely "A Place in Between", and "The Great Cleansing: A Flash in the Cosmic Pan". As far as my life outside of writing goes, I am a twenty-nine year old Nashville native with a seasoned record in the martial arts' system known as Sam Rang Do, of which I am slated to be the successor. Notwithstanding the responsibility such a position entails, I am determined to continue producing books, perhaps spanning multiple genres in addition to Sci-Fi. You can find the aforementioned short stories on my WordPress page for Leo Godsey. I'm happy to be a member of HomeTownReads, and I look forward to encountering new works, insights, and potential acquaintances among the community of authors, locally and beyond.